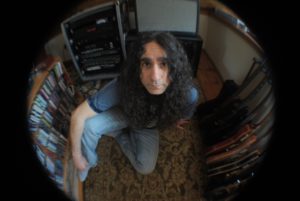 This brief discussion with Jim about his “signature sound” originally appeared on the PureGrainAudio.com website in November 2011.

In 2010, Jim Matheos (current member of the progressive rock powerhouse Fates Warning and OSI) and John Arch (former vocalist of Fates Warning) teamed up to form the new progressive metal band, Arch / Matheos. The band’s debut release, Sympathetic Resonance, Is due in stores on September 13th and I was able to catch up with Jim Matheos to discuss the gear he used to obtain his signature sound.

What one piece if gear do you use to obtain your signature sound?
Jim: Hard to pick just one piece, but a big part of my sound, live and in the studio, would be my Mesa Boogie MKIV.

What about it makes it so important to you?
Jim: It has a very unique sound, I think. Not to overdriven or saturated like a lot of modern metal recording. It also has wide variety of options. Very subtle changes in many of the tone parameters or EQ can affect the overall sound drastically. It’s taken me a long time to learn my way around it.

What are the major pros and cons?
Jim: It’s not easy to get a great metal sound right off the bat, but if you work with it you can get some great and unique sounds.

How long have you had it, how do you use it, would you ever change it?
Jim: I’ve had this particular one since 1991. I’ve used it on every recording I’ve done since then and on many tours.

There are probably only very few musicians who can claim to have been significantly involved in the emergence and development of progressive metal. WatchTower’s Ron Jarzombek can claim this verdict, as can Queensrÿche’s Chris DeGarmo and Michael Wilton, and of course Dream Theater’s John Petrucci. And Fates Warning guitarist Jim Matheos is probably one of the three or four most important forces in this genre, who have lost none of their importance for the international prog scene even in old age (Matheos is 58).

Since 1984, with the release of their debut album ‘Night On Brocken’, Fates Warning have been an integral part of the contemporary metal scene. After the 85 opus ‘The Specter Within’, the group succeeded in 1986 with ‘Awaken The Guardian’, a masterpiece of prog metal.

To date, the band has released well over a dozen albums, their main inspiration Matheos also released some highly acclaimed works with his prog rock project OSI (feat. keyboardist Kevin Moore, Ex-Dream-Theater) and four years ago installed his solo project Tuesday The Sky.

Which brings us to the topic: Tuesday The Sky shows Matheos from a different musical side, with cross-references to post rock and vivid ambient sounds. 2017 saw the release of the debut ‘Drift’, an instrumental-only album with the exception of two guest contributions by Seattle-based singer/songwriter Anna Lynne Williams. The same applies to the new disc ‘The Blurred Horizon’, on which the Englishman Tim Bowness sings only one song and his compatriot Gavin Harrison (The Pineapple Thief, King Crimson, Porcupine Tree) can be heard on drums on five tracks . Matheos explains the artistic twist from the much heavier Fates Warning to the more spherical sounds of Tuesday The Sky:

“It always takes a little while to get back in the right mood. I had just spent a full year writing and producing ‘Long Day Good Night’ for Fates Warning. So it took me a couple of weeks to shift gears and embrace this completely different approach. But once I managed to do that, it happened relatively quickly.”

Matheos admits that the creative break between the last Fates Warning production to date in winter 2019/2020 and the songwriting for Tuesday The Sky from autumn 2020 helped him to get enough distance and to find a comparatively calmer approach:

“In all my projects, of course, it can never be completely avoided that there are one or two similarities. I just hope it doesn’t happen too often because I try to keep them consciously separate, of course.”

The only exception is country/americana duo Gillian Welch & David Rawlings’ 2001 cover number ‘Everything Is Free’, a holdover from the ‘Long Day Good Night’ production originally planned as a bonus track for Fates Warning.

“Actually, several cover songs should be recorded for a bonus disc,” Matheos looks back. “I even recorded all the guitars for ‘Everything Is Free’. But then the plan was scrapped and I decided to use the song for ‘The Blurred Horizon’. However, all the other tracks were composed by me specifically for the new disc.”

PRS CUSTOM 24:
“I’ve owned this very special guitar since about 1992 and have played it on every recording and most tours ever since. While some of my other guitars are better for specific things, the PRS Custom 24 is a great and wonderfully balanced instrument that is good at many things. It’s the guitar I reach for the most in the studio.” [See guitar photos here]

GODIN LGX:
“I often use the Godin for clean sounds. But it also has a great piezo sound. A typical way of working for me is to use the piezo directly and the guitar pickups for two stereo tracks. The effect is a broad, well-measured clean sound on the left and right and an acoustic tone in the middle. I’ve used the Godin countless times on Fates Warning, OSI and also on my Arch/Matheos project.” [See guitar photos here] 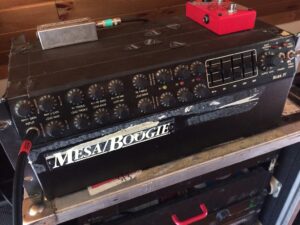 “The Mesa Boogie is my shortest line to a “real” amp. I’ve been using it since about 1994, since then the MK IV has been on every Fates Warning record and on many tours. It has a unique sound but is also very versatile. I mainly use it for heavy rhythm guitars. It takes a while to figure out exactly how to set it up, but once you get the hang of it, you’ll be richly rewarded.”

KEMPER PROFILE AMP:
“As much as I love my MK IV and other real life amps, there’s no denying that the Kemper sounds great, and ease of use is also a major plus. A sign of the times that nowadays I often prefer to use a profiling amp instead of spending countless hours with a head and a cabinet to find the right microphone position. The last Fates Warning disc was mostly a combination of the Kemper and my MK IV.” 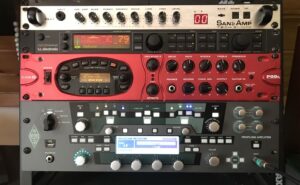 “People would certainly be surprised at how much I use the POD XT Pro. The distorted sounds are just okay though, so I mostly use them for demos. But the POD XT Pro does have some amazingly good clean tones, so I like to use it for some funky lo-fi sounds like you can hear on OSI and the new Tuesday The Sky album.”

TC ELECTRONIC G-MAJOR:
“The G Major has always been a staple of my live rack. It has really nice chorus and delay sounds. A great device if you are looking for an all-in-one effects solution.” 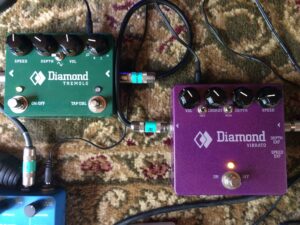 “I love both pedals! They are extremely versatile and sound wonderfully warm. The tremolo pedal, which lets you type in all the standard BPMs, also has a mode button that can be used to create some really cool and fancy rhythms. I’ve had numerous other vibrato/chorus pedals but none sounded as good as this one. Both pedals were used extensively on both Tuesday The Sky discs.”

ACCESS MUSIC VIRUS B:
“I’m not a particularly accomplished keyboardist (can someone show me where middle C is?), but I’ve been using this particular synthesizer extensively since 2000. Kevin Moore played it on Fates Warnings’ ‘Disconnected’ disc and after hearing it I had to own a copy. I’ve used it on every Fates Warning album since ‘Disconnected’ and on every OSI release. Unique sound, some great bass patches and sequences. It’s the only physical synth module I currently own.”